Saturday was designated fun day for the household. This week we decided to take a family outing to one of Seattle’s many off-leash areas, Northacres Park. 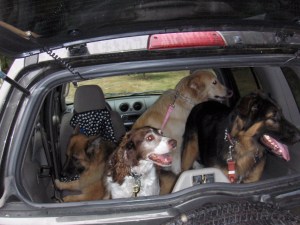 This was the first time we had taken Willow to a dog park. We hoped she would like it, but have been afraid that her limited mobility might make it difficult for her. Wow, were we wrong. She got there and was ready to go.

We used a towel as a sling to help her get a round. We decided the trails would be a problem with the wheelchair. She kept right up with the rest of the pack, more or less. She seemed like she was having a lot of fun, but was tired out by the time we headed home.

Loki nominated himself the official park greeter and had to go hassle all the other dogs that were there that early on a Saturday morning. And of course, he consistently hassled Daisy. Snuffer also made his presence known as you can see in the video.