Skip to content
Time for us to dive into Willow’s progress on her rehabilitation plan.

Willow has now been with us for nine-and-a-half months. She has lost twenty pounds. She still won’t get up on her back leg and that gives us some concern. We’ve tried making her walk in her wheel chair, which allows her to lift the weak leg off the ground move along using just her front legs. We’ve also tried a sling which becomes an incredibly awkward ballet as she tries to avoid using her back leg and we pirouette and brisė our way down the sidewalk.
We had hoped by now she would have built up enough strength to lift herself. While she can bump along at a pretty good pace, she does not get herself far off the ground and she ends up with a pretty messy tail and stump. A big concern is that as a 12-ish-year old German Shepherd, she may have other issues preventing her from using the back leg that are common to the breed, such as spinal myelopathy or hip dysplasia. She could also have nerve damage from whatever accident caused the amputation of her leg. We are, however, holding out hope that we can at least build up enough strength in her back end that she can move about comfortably during her golden years. So, we turned to swimming.

We went to Bow Wow Fun Towne, a daycare and doggie pool owned by our friend Mary Mark. Mary was very patient with us as we tried this same route with our former dog, Thor.*
We geared her up in a lifejacket and hit the water. She did not panic, which was one of my worries, although she did seem a bit nervous.

Mary was very good about paddling her around the pool. Will was a bit fixated on me, so I walked up and down the side of the pool giving her encouragement. After a few minutes, she calmed down and swam a few laps. She tired out soon and took a break. Thank goodness for the lifejacket or she would have sunk. After a few minutes to catch her breath, she went back at it, making a few more laps before calling it quits.

I expected her to be bushed by the end of her session and she was. We got home and she drank about a gallon of water, turned and flopped onto the entryway rug and immediately fell asleep.  Later, in the evening, she got up and seemed more perky and alert than usual, so maybe it did help. I don’t know if it will help her in the long run, but we think we’ll take her back on a frequent basis to get her more exercise. 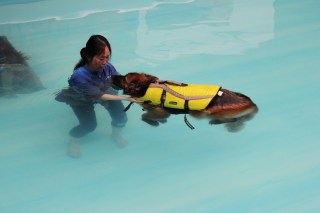 *Thor never did swim. He did, however, like his long sessions floating in the warm pool, getting so relaxed that at some points he actually fell asleep. And, he was always a bit more light afoot after his swimming days. So here’s a look back at the old guy for fun.