First, let me apologize for the long time between posts. I have been busy moving (more on that in a future post) and with a trip to Europe.

I spent a week in Paris; the City of Lights, the city of romance, the city of love…unless you are a dog it seems. From first appearances, Parisians have no amour pour les chiens.
I am not about to say that I know everything about the country and maybe there are more dogs running around outside the city. After all, this is the country that brought us the French Bulldog, French Poodle, Papillon, Brittany, Great Pyrenees, and many others as well as the latest sport to catch attention from American working dog enthusiasts, French Ring.
I was surprised at the sparsity of dogs I saw. After noticing this on the first day, I began to take pictures of all the dogs I did see.

While I am not including every photo in this blog, I think I took fewer than 20 pictures over the weeklong visit. In fact, I am sure I saw more “No Dogs” signs than actual dogs. 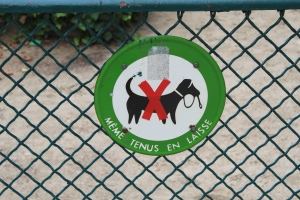 I understand that the tourist area is probably not the best place to go dogspotting, but coming from a city in the US where every park, tree-lined street, and playground usually has a dog running around it was a shock.

Another big difference between the dogs I saw there and those I see here in the states, several of the dogs were not even on leashes. The owner was walking down tourist-filled sidewalks and their dog weaved through right behind.

I know many people have well-trained dogs here, but many more would unleash their dog in that environment and it would be the last time they saw the pooch, unless animal control called them a few days later to say they had picked him up as a stray in the next county over. ( I think we should all train our dogs better, and am available to help you do so for a fee. Just sayin’.)

I think I touched on this a bit when I was in Eastern Europe a couple years ago. Fewer dogs, but those in public places seem to be better trained or at least more under control than American dogs.
I know John Rogerson in the UK, is working with their Kennel Club to create a scheme where dogs would be allowed to run free in any public space, but owners would need to be able to prove that the dog had passed the equivalent of the AKC’s Canine Good Citizen test to be allowed off-leash. This would eliminate the need for dog parks as any park would essentially be a dog park for properly behaved pooches.
How about you guys? Have you noticed any differences in dog behavior during your travels? If you haven’t ventured outside the US, what about differences between various cities and states?