We have a fascination with dogs. They are everywhere, in parks, in cities, in the country, in art. One might think that this is a fairly recent phenomenon since it was only a few generations ago that our best friends moved from a position as a working animal living outside to a family companion sharing our homes. That assumption is proven wrong in dramatic fashion with a little trip I just took to Italy.

We started out Italian adventure in the city of Rome, home to diverse cultures, peoples, and ideas going back millennia. Dogs were everywhere. People, young and old, walked the crowded streets with pups at their heels. Many walked leashless to the shock, horror, and admiration of a person like me, used to seeing dogs lurching along at the end of tethers. 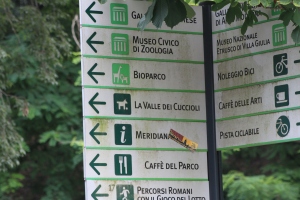 an invention I imagine as a truly American idea, where dogs are allowed to run and play and interact.

This behavior does not appear to be allowed when the dogs are accompanying their owners on visits to the coffee shop or on the trains. The park was a beautiful place, lush green grass situated on the edge of the Jardins de la Villa Borghese. 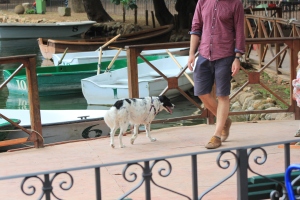 In this portion of the park dogs are allowed to frolick and run,

but as owners walked out the far end,

the dogs once more took their place near the person’s side and walked, generally ignoring other dogs. I was as shocked at the dogs’ behavior as I was when visiting other European cities in past years. (See more.) While they were nearly as ubiquitous in Europe as in the U.S., they were much better behaved. Dogs off leash walked casually beside the owner even when other dogs sauntered past. They napped quietly outside cafes and bars as the owner stopped in for a caffeine pick-me-up or late afternoon aperitif.

So, why do dogs in Europe act so calm and collected while those here in the States can’t even seem to make it into doggy daycare without dragging their person with heels digging into the ground, along behind them? The answer to that could save the lives of countless American hounds that find themselves dropped off every year at shelters and in rescues because of behavior issues.

We saw more pups as we traveled to Florence and Venice, some accompanying their owners and a few on leisurely strolls seemingly on their own.

Occasionally, a couple dogs would meet in the market, bark and immediately run off in a mad dash to who knows where, with the owner calling nonchalantly behind them.

In Venice, as in many European cities, dogs are welcome on public transit, which in the City of Bridges happens to be boats. As you can see indicated in the sign, they are required to be leashed and muzzled while on board. 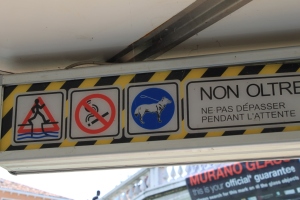 The country also appears to have a rich history when it comes to its love for dogs. Days spent in museums in all three cities gave us a peek into the lives of our canine companions going back thousands of years. Statues of wolf-like dogs, 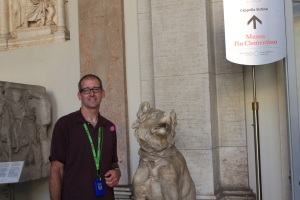 statues of early incarnations of some of the most famous Italian dogs, 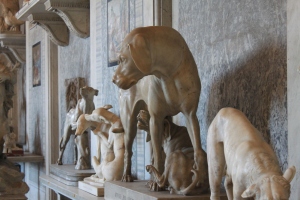 dogs in painting, and more decorated the halls and walls of palaces and museums alike.

So what has Italy contributed to the canine community? A lot, to be sure. Breeds as diverse as the Neoplitan Mastiff, Italian Greyhound, Spinone Italiano, Braccho Italiano, Cane Corso, Maltese, and to a degree even the Saint Bernard all have Italian roots.

The French Bulldog seen chattering at his friend in the piazza, does not. 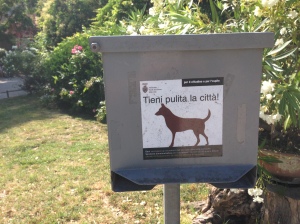 Mutt Mitts- pick up after your pooch! 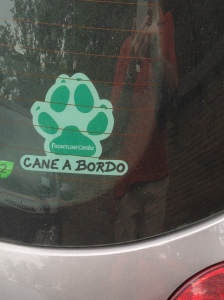 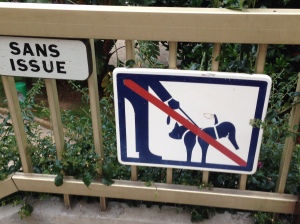 No Dogs Allowed in Park