In 2007, authorities discovered 50-some dogs on a property belonging to NFL player, Michael Vick, as part of an investigation into a dogfighting ring. Up to that point, most of the dogs found in such investigations were simply deemed too dangerous to be rehabilitated and were euthanized. However, in this case, pit bull advocates came forward and offered to take on the daunting task of helping those dogs change from fighters to home companions. They took the name of their devil and claimed it as their own, becoming the Vick-tory Dogs. 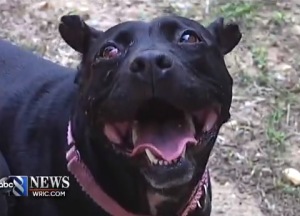 They had faced a short, brutal life of violence, but were rescued, rehabilitated, and loved, with many successfully spending the past seven years as trusted and beloved companions. Today, a family said goodbye to their success story, a small black pittie named Gracie. For a touching look back at her story, follow this link.