Medical science is making incredible advances, sometimes performing feats seemingly right out of the realm of science fiction. However, there are times when some of the best treatment options are out of the distant past.One such treatment option is acupuncture.

Acupuncture is a key component of traditional Chinese medicine and primarily consists of inserting thin needles into key points on the body, although it can also utilize pressure, heat, and even laser light. It is believed to have begun in China around 100BC, later spreading through the Asiatic countries and eventually into Europe. Originally, acupuncture had a strong spiritual lean, including focus on a person’s energies, their qi, meridians, and even the effect of lunar and solar cycles on their health. As doctors learned more about the science of anatomy, many of these elements were dropped, although, in some circles they are still included in the practice.

No one knows when acupuncture was first applied to dogs, but like most procedures, once a market was there, the practice made the jump.

Daisy had been showing many signs of discomfort associated with age, arthritis, and her diagnosis of spondylosis. We first began laser treatments and did see a bit of improvement there. So, since Dr. Katie Buss, one of the vets in our clinic, was certified in acupuncture, we gave that a shot, too.

The procedure is easy and comforting for the dog. 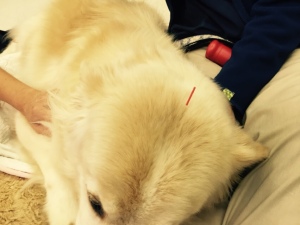 Dr. Buss starts with a brief massage for the dog. After the initial rubdown, the first needle are inserted. If you’ve never had or seen acupuncture that may have you thinking of those awful flu shot injections or the last tetanus shot you received. It’s nothing of the sort. The needles themselves are as thin as a human hair. 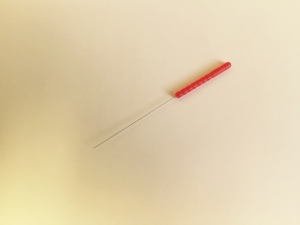 The vet or practitioner sets them in place and with a quick tap of the finger, they are inserted into the skin. A few minutes in and Daisy’s blonde coat was dotted with the red plastic grips of the needles and she was lying on the bed in a near-drowse. After a few minutes of letting her relax with the needles in place, they were pulled out and she got another gentle massage.

There was not a notable difference right away, but we have continued weekly acupuncture treatments in conjunction with her laser therapy, and we are seeing a bit of improvement.

Not everyone is a fan of acupuncture. There are more than a few veterinarians who find the idea of it ludicrous. Dogs do not have the ability to tell us if they feel better and it is nearly impossible to quantify any results. However, I have gone though the process myself and can say I felt better when it was over. We’ll keep you posted about her progress as we combine the age-old treatments with the cutting edge technologies.