Marijuana, once demonized as a gateway drug that would rot the mind of youth and lead people foolish enough to try it into a delirium of “reefer madness,” is now going mainstream. Coast to coast, and across broad demographics, pot use is becoming more widely accepted. At the time of this writing, recreational use is legal now in four states and the District of Columbia, and medicinal-use marijuana is allowed in another 21 states.

Not everyone hopping on the ganga train is hoping to get you high, however. Several upstart companies are pushing products laced with cannabidiol or CBD. What is that, you might ask?

First, it is important to understand a bit about bud.

When people get high on marijuana it is primarily because of Tetrahydrocannabinol, more commonly known as THC. This is the primary compound in cannabis. The other main ingredient in the mix is cannabidiol. Recent research has shown CBD to have analgesic, anti-inflammatory, and anti-anxiety properties without making the user feel high or stoned. If people can get these positive results without the psychoactive side effects, these entrepreneurs suggest, why not our canine companions?

Two such companies are Treatibles and Canna-Pet. Treatibles launched back in 2013 in California, after many patients in medical marijuana dispensaries began asking about using CBD oil for their pets’ needs. Today, they provide a variety of lab tested treats for dogs. While right now they do not have any cat-specific formulas, their website says they hope to release some soon.

Canna-Pet is another leading provider of CBD-based treats for pets. They got off to a rough start after running afoul of the FDA, not for use of CBD, but due to the way the company marketed the product. The Seattle-based business had made some fairly straightforward claims that the products provided medical benefits. THe FDA looks at CBD products like supplements, not pharmaceuticals, and does not allow producers to tout any actual medical benefits. Canna-Pet changed its marketing strategy as well as copy on its website and returned to the market. 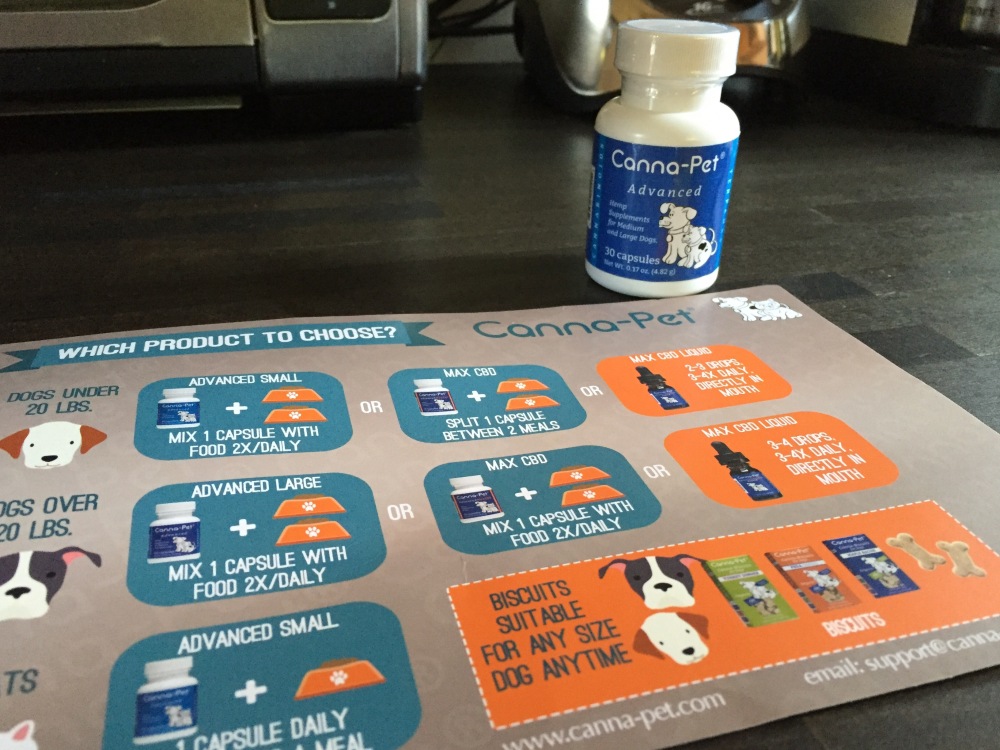 I have a number of dogs with issues, so figured they would be the perfect test subjects for the healing properties of CBD.

Daisy was diagnosed with cancer back in March of this year. She came through her surgery but had lingering effects, such as weakness, nausea, and inappetence. Pixie, our 5-year-old German Shepherd rescue girl is a bundle of nerves. She went through several unfortunate situations before landing in our pack at the age of eleven months.Years of counter-conditioning training, desensitization, and behavioral assessments, and she still has a laundry list of behavioral issues. She is afraid of thunderstorms, fireworks, new places, people(including even me if I move too fast or have been gone too long), and any change to her environment.

I bought a few bags of a variety of treats from both companies and offered them to my girls. We started with Treatibles. Daisy had become very finicky since her surgery to remove a tumor, but scarfed these treats right down. Pixie has never been shy about eating so that was no challenge for her. I followed the instructions on the bag as far as how many to give. We repeated this on a regular basis for a couple weeks, but there was no noticeable change in demeanor in either dog. On one occasion, a storm was brewing outside, so I gave a few extras to Pixie in hopes that this might calm her down. She has a terrible thunder-phobia. Unfortunately, there were no notable effects. She still paced and whined and tried to hind behind us through the night. I thought it might take longer for the ingredients to take hold, so continued feeding her treats on a daily basis for the next couple weeks according to the bag directions. As we approached the Independence Day holiday, the neighborhood began cracking and popping on a regular basis as people set off fireworks. Again, as with the ongoing storms, there was no notable relaxation of her behaviors.

We also continued giving Daisy her treats. I think this is probably not a fair test, as she was also on a variety of pharmaceutical painkillers, but still did not appear to have a notable change in her demeanor. The upside was that while she continued to be very finicky about eating, she had no hesitation in eating either the Treatibles or the Canna-pet snacks. As she progressively got worse, we allowed her all the treats she wanted.

As the nation looks at serious ways to legalize pot for both recreational and medical uses, there will be more talk about the benefits of  cannabinioids. While I strongly support more research into this and alternative therapies, I don’t know if it is as effective as its supporters may believe in its current form. That said, my dogs did like the treats, so I will most likely continue to offer them to Pixie with hopes that it may, even if unnoticed by me, ease her anxiety to a small degree. Daisy, however, is now beyond the need for any medication. I will also  give some of the other brands a shot and will post any updates if there is any news.