They say politics make strange bedfellows, and well, so do captive cheetah breeding programs it seems.

This week, I got a chance to visit the Wildlife Safari in Winston, Oregon. Spreading out over four-hundred acres in southern Oregon, this is an incredible place. Founded in 1972, it is now home to some five-hundred animals, including ostrich, zebras, Watusi cattle, lions, tigers, bears(oh, my), American Bison, elephants and more.

One species they have an especially positive impact upon is the cheetah. More than two hundred cheetah cubs have been born since the inception of the Park’s captive Cheetah breeding program. I am a fan of all kinds of things that have to do with animals, but what makes this of special interest to the American Canine blog is how they raise those little cheetah cubs.

The cheetahs have puppies! Or, a puppy to be specific. In January of this year, the Park welcomed Khayam Jr. from the San Diego Zoo Safari Park. He was paired up with an adorable rescue puppy from Saving Grace Pet Adoption Center named Rhino.

While it may seem a bit odd, this is not just a one off pairing. Putting cubs with a companion pup is pretty much standard protocol in many zoos. In addition to the Wildlife Safari Park, the Columbus Zoo in Ohio, San Diego Zoo in California, and Busch Gardens Tampa are just a few of the nationally recognized zoos using this method to help ease the shyness and stress suffered by captive cheetahs. Cheetahs can be skittish and nervous by nature, and having these boisterous bowwows with them can boost their confidence. Also, as we were told by the caretaker this week, cheetahs are not like housecats in their grooming habits. Where a cat will naturally groom themselves, cheetahs groom each other. Since the cub is not living in a coalition (that’s what you call a group of cheetahs) the dog will help with some of the grooming when it licks his adopted sibling. 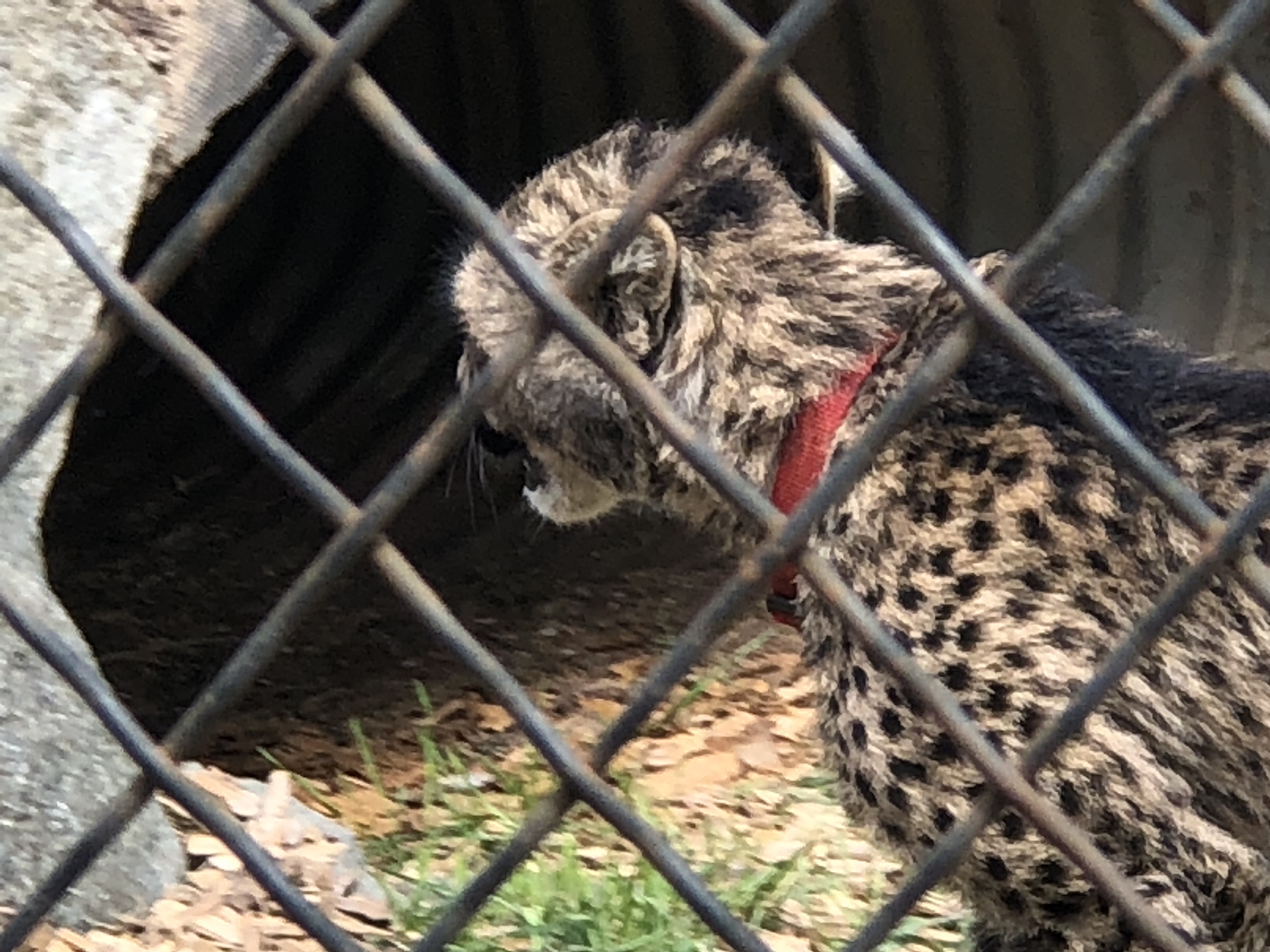 These big cats need all the help they can get. It is estimated that they have lost some 90 percent of their habitat due to development and farming. Without programs like this to raise awareness of their situation, the world’s fastest land animal would be racing toward extinction. In fact, in Zimbabwe, their numbers plummeted from around twelve hundred in the year 2000 to less than two hundred in 2016. Right now, they are listed as a “vulnerable” species, meaning if things don’t change soon, they will be on the endangered list.

Two other items I would like to touch on from the visit. The park has one canid other than the dog, a Maned Wolf from South America. This creature looks like an overgrown fox, and has wolf in its name, but is neither. It is actually the only member of the genus Chrysocyon (meaning “golden dog”). This particular guy looked ancient and shared his space with an anteater, whom he seemed to tolerate, but did not appear fond of.

We also got a chance to get up close and personal with the lions. What I found most interesting was the caretakers using clicker training to get the lions to comply with their requests. Just take a look in her hand in these pictures.

The lionesses have been trained since they were cubs to come up to the fence, turn sideways, stand up, lie down, all through clicker training. I bring this up because I hear so many trainers in the dog world explain that they have to use compulsion because their dog is too dominant, strong, hard-headed, and a whole bushel load of other excuses not to use marker training. If you can train a lion to come sit down with a clicker and “treats,” in this case big chunks of beef, then you should be able train a German Shepherd to behave without choking the heck out of it with a prong collar. That is, unless you’re a crappy trainer.