As pet owners we hate to think about any scenario that could put our little buddies in need of emergency medical care, but it happens all too often. From getting hit by a car to life-saving surgeries, there are countless ways that a dog could find himself in need of a blood transfusion.

Until recently, many vets simply either used one of their own dogs as a donor when blood was needed or called upon one of the handful of national blood centers such as Hemopet and The Animal Blood Bank in California or The Veterinarian’s Blood Bank in Indiana. Now, there is a growing field of canine blood banks.

The requirements to become a donor are simple. A dog must be between 1 and 6, healthy, with a good temperament and able to lie still for about 10 minutes.

Loki, my 2-year-old Shepherd, recently became a donor at the ACCES Emergency Clinic in Seattle.

The process starts with a preliminary visit to draw a sample to test for any blood-borne diseases or problems and to make sure a dog is of the correct blood type. It used to be “common knowledge” that all dogs had the same type blood. But advances in veterinary medicine have proved that false. There is a universal, however there are subsets to that which can cause reactions in some dogs. In addition to a quick check-up to make sure everything looks good, the first visit is also a bit of a trial run for the real thing by making sure the dog can lie still long enough to donate. This was the critieria that worried me with Loki. He is a bundle of energy and being still while in a new place with new smells and new people could present a real challenge. He did a fantastic job, letting everyone carry out their roles, provided they offered him plenty of pets as they went through the steps.

A couple weeks later, we went back for the full-fledged donation. He got another once-over by the vet to make sure he was still a healthy dog and the techs got started. Allyson, the amazingly dedicated manager of ACCES, shaved his neck a bit where the needle would go in to prevent anything that might be on/in his hair from infecting the wound when he was done.

Loki was a champ. He lay still and let everyone do their job, not even flinching when the needle pricked him. While Allyson took 450 ml of blood, everyone else joined in keeping the pup calm. Lots of belly rubs. Lots of head stroking. Lots of petting. The blood will undergo another screening process to make sure there are no previously undetected pathogens in it. If everything is okay, next time, his plasma will be further divided so it can be saved in smaller portions and used in more ways.

Once the hard part was done, Loki got lots of treats, his “Blood Donor” bandana, and what I think was his favorite part, a toy. He spent the next three days doing his best to destroy the toy and drive me crazy with its weird little noise. 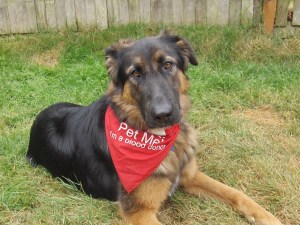 In the commercial blood banks, the dogs donate every four to six weeks. Volunteer donors can give every three months. So in October Loki will be back on the table. While he may not know how much his ten minutes does to help other dogs, he does know that it gets him some big treats, lots of love, and a toy to take home. And knowing we are helping others, is the reward I get.