Call me a sucker for a sob story. I first spotted Willow on the Washington German Shepherd Rescue website. Her name was then Kiyanna and she had that tell-tale heart under her name. You know the one. The little green heart that means a special needs dog, or as we like to call them just “special” dogs. 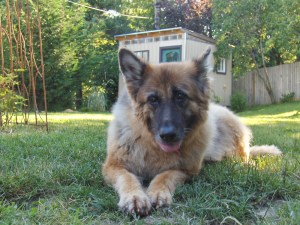 I am told her owners were an elderly couple, both of whom passed away within a short time. The next of kin dropped her off at a shelter. She should be a small German Shepherd, maybe 55 pounds, but she weighs in at nearly ninety! She is also missing a back leg and the remaining one is not strong enough to lift her weight, so she can’t even stand up. The woman at the rescue says when they first got her from the shelter (a small blessing since most places would have simply killed her due to the medical issues) she was unable to even move enough to relieve herself.

Now, thanks to a generous donor, she has a wheelchair to help her exercise. We take her on morning and evening walks. Each day we go just a bit farther down the block and back. She also gets “forced” to go outside a couple times a day for short patrols around the yard’s perimeter.

She also has us. Her first foster, right out of doggie-prison, renamed her Alexis, but said she didn’t get much response with it. We are going with Willow. She is making herself right at home in our little pack. Even now, as I write, she is sound asleep at my feet. When I move around the house, she will pop up into her sitting position and follow me around, using her one back leg as a pogo. In the week we’ve had her, I think she’s seen some improvement in her strength- actually Heather points it out and I agree.

So, as she continues on her road to recovery and independence, we will keep all you readers posted. Wish us luck.