So this post is a bit late coming.
The adoptathon saw some real success. we had several people who  had already been approved as adopters come down to meet a few of the dogs. At least two dogs went on to their forever homes, including our overnight guest Azar. Yeah!
Another went to a “permanent foster.” That is someone who is willing to take the dog in and foster it, but if they get along well, they will become the forever home. Unfortuantely, there was one big problem with the adoptathon.No one wanted Pretty Girl. A few people were interested, but may have just been kicking the dogs. I mean, kicking the tires, as they say in the used car trade.

After the jump you will find pix of the big day and some of the available pups.

Heather doing her best to push the goods. 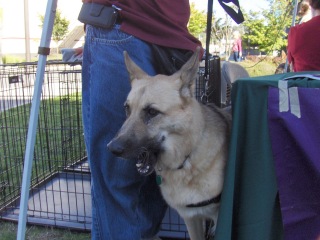